Leading researcher of Department of methodology and methods of sociology of Institute of Sociology, UNAS 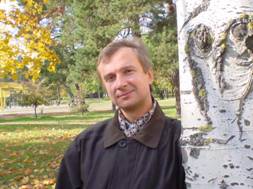 Stegnii O. Institutionalization of Environmental Interests in the Society of Sociogenic Risks. Kyiv, 2003 (in Ukrainian). - 380 p.

Stegnii O. Principles of Sustainable Development: What do the people and civil servants in Ukraine know about them? (according to the results of sociological research)— Кyiv: UNDP, 2015 (in Ukrainian). — 86 p.

In 1990, at Uzhgorod State University, defended his Ph.D. thesis on the topic "The struggle of progressive youth organizations of the Federal Republic of Germany for the social and economic rights of working and student youth (the second half of the 70's - the middle of the 80's)" with the award of the degree of andidate of historical sciences. In 2003, at the Institute of Sociology of the National Academy of Sciences of Ukraine defended his doctoral dissertation on the topic "Institutionalization of ecological interests in society of sociogenic risks" with the awarding of the degree of doctor of sociological sciences in specialty 22.00.04 - special and branch sociology. In the Institute of Sociology of the National Academy of Sciences of Ukraine has been working since 1998. At the moment is a leading researcher in the department of history, theory and methodology of sociology. Chairman of the Research Committee on  Environmental Sociology of the Sociological Association of Ukraine (since 2007). Member of the Research Committee 24 "Society and the Environment" of the International Sociological Association (since 2008). Participant in many international scientific sociological projects, among them: